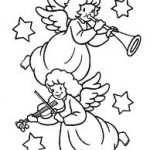 Since February 2012, volunteer Street Angels have been patrolling Windsor town centre between 10.30pm and 3am on Friday nights, offering care and a calming, non-threatening presence, helping to keep vulnerable people safe late at night.

The scheme was been set up under the umbrella of Churches Together in Windsor with support from a number of organisations including Thames Valley Police, the Royal Borough of Windsor & Maidenhead, Radian, the Edith Murphy Foundation, the Prince Philip Charitable Trust, and the Shanly Charitable Foundation, as well as from individual donors. Now, responsibility for Street Angels has been passed to a new organisation (seeking charitable registration) called Windsor Christian Action.

Wearing their distinctive blue reflective jackets, Street Angels patrol the streets in teams of three, carrying a backpack containing, among other things, water, lollypops, flip-flops, and a first aid kit. Sometimes they bring people back to the Baptist Church base to help them sober up and get them home safely. An important contribution to community safety is the removal and propoer disposal of dangerous items such broken glass bottles. More than 1,600 people have been helped by the Angels. David Bullock, Police Community Support Officer who has been the driving force of this initiative says: “It has been a brilliant year – I’m so proud of the Angels.”

But we need more volunteers! We’d like to extend this service to Windsor by sending out Street Angels twice a week. We also need Support Angels to ‘staff’ the base at Windsor Baptist Church during the shift.

If you feel called to become a Street Angel, or Support Angel, please contact PCSO David Bullock, either by telephone on 07816 848231, or by email: david.bullock@thamesvalley.pnn.police.uk